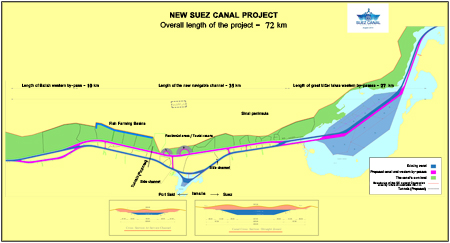 The Suez Canal, a waterway running between Asia and Europe, was built between 1859 and 1869. It had a throughput of about 60 ships a day and duration of one crossing lasted approx. 22 hours. Unfortunately, the channel wasn?t wide enough to let the ship traffic go in both directions at the same time and the ships had to enter into special bays to let the other ones through.
After 145 years they decided to build a new canal next to the existing one. The official opening of the new canal of a length of 35 km is planned to take place on the 6th of August. The investment will enable ship traffic to go in both directions at the same time, reducing the time of cruise from 22 to 11 hours.
To finish the construction it was necessary to dig out 258 million cubic meters of sand which equates to a volume of 316 Palaces of Culture and Science in Warsaw. Near the Suez Canal the Egypt government plans to create an industrial and logistics zone.